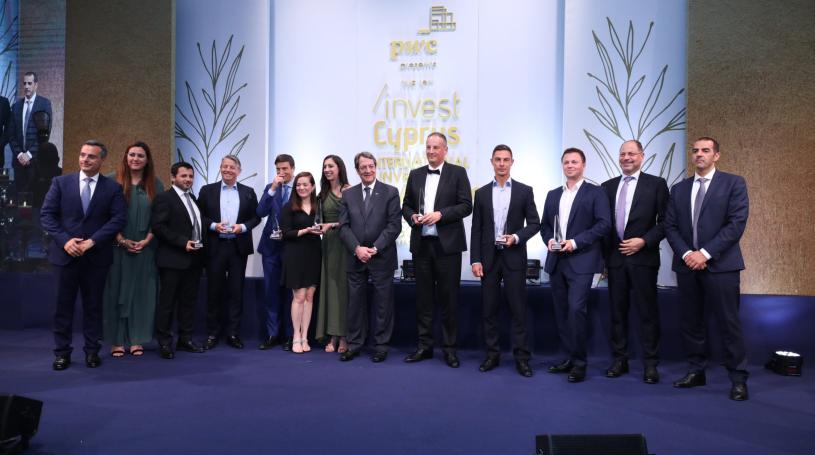 On 1 July 2022, IMH held the 10thΙnvest Cyprus International Investment Awards ceremony at the Parklane Spa & Resort in Limassol, under the auspices of the President of the Republic, Nicos Anastasiades. This series of awards acknowledges the importance and value of notable companies that operate in Cyprus and thereby contribute to both the local economy and the overall development of the island as an international business hub. ECOMMBX was one of the seven companies that proudly received this prestigious award which was presented jointly by Philippos Soseilos, CEO of PWC Cyprus, and Kyriacos Kokkinos, the Deputy Minister to the President for Research, Innovation and Digital Policy. On behalf of ECOMMBX, the award was received by Chief Operations Officer / Executive Director Fotini Tsikkou, Chief Financial Officer / Executive Director Georgia Pitta, and Anti-Money Laundering Compliance Officer / Chief Risk Officer Vicky Christofidou. Commenting on the award, ECOMMBX CEO & Managing Director Michael Charalambides reiterated the company’s mission and vision, noting that its objective was to create a techno-hub that is ideally equipped to process the transactions of small and medium sized businesses under a single “platform to rule them all” - a state of the art AI driven infrastructure that extends beyond the traditional means of just SWIFT and SEPA, capable of millisecond monitoring of every single transaction for maximum scrutiny and speed of execution. With an eye on the future, Charalambides said: “For companies hoping to penetrate the global market, Cyprus has great potential as a base for international business. It has a very favourable taxation system and a very strong financial institutional license under the Central Bank of Cyprus which has the right and power to passport across the European Union. Our aspiration is to become the next European unicorn as a company that is synonymous with innovation, transformation and digital services across the globe.” Boilerplate Established in Cyprus in 2016, ECOMMBX specializes in B2B e-account management, cross-border payments and competitive currency conversions. To ensure the most cost-effective and efficient execution of e-banking transactions, the company’s innovative serving model is based on four cornerstones: Advanced technology that connects to the global banking industry, customized connections with banking partners around the world, stringent security and maximum speed. The result is satisfied customers that rely on ECOMMBX for top-notch service.